For many years the motivations for the use of yeasts in feed reside in their high content in proteins and vitamins (group B). Only recently, the ban of antibiotic growth promoters in feed for production of animal foods in the European Union has increased interest in evaluating the effect of yeast and bacterial products (DFMs — Direct Fed Microbial) on the gastrointestinal ecosystem, rumen microbial populations and overall animal performance.

Feeding yeast (Saccharomyces cerevisiae) has largely increased in Ruminants: lactating dairy cows (for reduction of rumen lactate and prevention of acidosis and improving production efficiency), newborn calves (for reducing enteric disorders), at weaning (for reducing stress and improving intake).
On the other hand some bacterial species have been proposed for monogastric animals, pigs and piglets in particular (ex. Enterococcus faecium is used as a probiotic for piglets and has been shown to modify the porcine intestinal microbiota).

Only one Yeast type, Kluyveromyces Marxianus (the strain K.m B0399 in particular), has shown to be equally effective as a health and growth promoter in both monogastric and poligastric animals.

This cumulative effect can in part be explained by unique immunomodulatory action of this yeast, unique enzymatic activity (ß-galactosidase and inulinase, but also endopolygalacturonase, carboxypeptidases, and aminopeptidases) and unique metabolite complex. These beneficial metabolites also act as the "active" ingredients themselves and suggest that live K.marxianus cells may not even be required for exerting its effects.

1. The ability to enzymatically degrade lactose due to the presence of the enzyme beta- galactosidase (b-gal) or lactase in the cytosol in its constituents galactose and glucose.

Thanks to its unique enzymatic properties K.marxianus produce valuable bio-ingredients (metabolites), either as A) fermentation by-products or B) as the result of yeast autolysis:

A3. Short chain fatty acids (SCFA), in particular lactic and acetic acid - produced by K.marxianus much more efficiently than many of the commercially available products based on Saccharomyces cervisae

B. Immunomodulators and immunostimulators (activate immune cells such as macrophages, neutrophils, and other immunocompetent cells): yeast cell wall polysaccharides — glucans and mannan.

K.marxianus has the capacity of production and secretion of B-glucanase enzyme which cause autolysis of the cell wall and liberation of mannan & B-glucans. The proportion of soluble branched b-1 ,6—glucan is much higher in Kluyveromyces marxianus than in Saccharomyces cerevisiae.

Modulation of the host's immune system

Kluyveromyces marxianus was shown to have different immune-modulatory properties from Sacharomyces in terms of adaptive immune responses promoting health benefits in conditions characterized by excessive inflammation.

It reduces Carbon Footprint as homo-fermenting yeast (particularly in anaerobic conditions): produce 2 ATP for every molecule of glucose which leads to a decrease in C02 and methane production 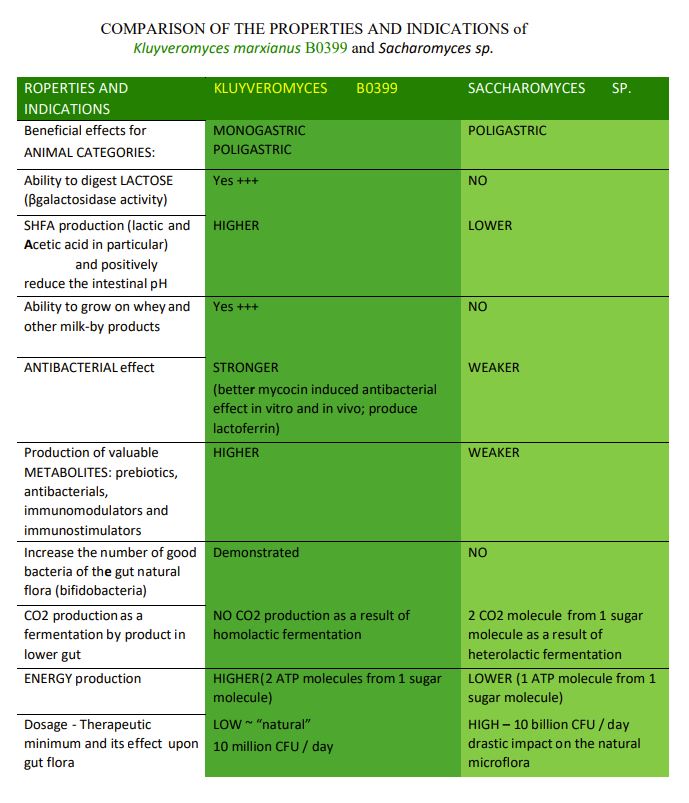 Your shopping bag is empty.
Go to the shop